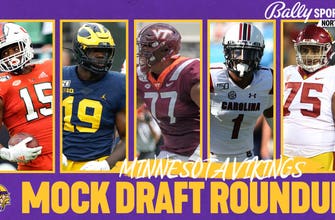 Mock drafts really start to take shape this time of year. After all, the ones in January and February come before any transactions are made.

With the start of the league year, players are cut and free agents signed and/or lost. Minnesota is no different.

Those moves could well affect Minnesota’s plans in this year’s NFL draft, at least in the early rounds.

As usual, a Rick Spielman-led team is flush with capital, although Minnesota has no picks in either the second or seventh rounds (currently; we all know Spielman will make a trade to get a seventh). The Vikings have a pick in every other round, including two in the third, four in the fourth and two in the fifth.

Most mocks, of course, just concern themselves with the first round (we’ve noted below which ones do multiple rounds).

In predicting the Vikings’ first-round selection at No. 14 overall, as you will see, one player stands out. Overall, though, the lines – either offensive or defensive – play a big part in the mocks.

Here’s the latest roundup of mock drafts for the Vikings from around the web:

Daniel Jeremiah of NFL.com: Jaelan Phillips, Edge, Miami. “Phillips is the most talented edge rusher in the draft. If not for some durability concerns, he would go higher than this pick.”

Peter Schrager of NFL.com: Kwity Paye, Edge, Michigan. Paye improved every year at the college level and can play all three downs. He’s as polished as any of the QB hunters in this class. Minnesota needs pass-rush help ASAP.

Ben Standig of The Ringer: Christian Darrisaw, OT, Virginia Tech. “Saying goodbye to Reiff isn’t exactly a loss, but it did create a hole at left tackle. Enter Darrisaw, a 6-foot-4, 322-pounder with good arm length and feet for the position. One scout said Darrisaw is a ‘talented dude. Good athlete, big man. Dancing bear. He’s light on his feet. One of those guys who athletically can play on balance and stay in front of people. You can rely on that guy to block the edge. He’s a little raw, but he’ll be just fine.’ Darrisaw won’t fall any further than Washington at No. 19 or Chicago at No. 20, but his ceiling is a bit harder to gauge without knowing when Slater and Vera-Tucker are taken or how many teams rank Darrisaw behind only Sewell.”

Michael Middlehurst-Schwartz of USA Today: Jaelan Phillips, Edge, Miami. “Medical evaluations might determine whether he will be the first edge defender off the board or is in store for a longer wait, as teams will want more clarity on the concussions and injuries that precipitated his medical retirement at UCLA prior to his transfer. So long as Minnesota is comfortable with his outlook, Phillips should be an alluring option for a pass rush in need of rejuvenation regardless of DE Danielle Hunter’s future with the franchise.”

Vinnie Iyer of the Sporting News: Micah Parsons, LB, Penn State. “Parsons’ stock isn’t falling; it’s the fact the teams picking ahead of the Vikings aren’t totally comfortable going for this position over other needs. He remains a hard-tackling and well-covering cleanup man, a rangy playmaker in the Luke Kuechly game-changing mold. Minnesota could go in other directions, including offensive line and pass rush, but they ultimately go for the best player available who can keep up the defensive youth movement and star inside or outside, especially with an Anthony Barr out in 2022.”

Chris Trapasso of CBSSports.com (2 rounds): Jaelan Phillips, Edge, Miami. “The Vikings get a polished defensive end who meets all of their typical standards from athletic and size perspectives.”

Tom Fornelli of CBSSports.com: Kwity Paye, DL, Michigan. “Paye was more potential than production at the college level, and all that potential remains. He’s explosive and powerful, but his repertoire needs refinement. If the Vikings help him tap into that potential, this could be a pick that pays off for years to come.”

Ben Linsley of Pro Football Focus: Christian Darrisaw, OT, Virginia Tech. “The release of Riley Reiff only further weakened what was already a shaky offensive line in Minnesota. The pre-draft options for the tackle opposite Brian O’Neill — who will be playing on the last year of his rookie contract in 2021 — include moving Ezra Cleveland back out to tackle after playing guard as a rookie last season and giving 29-year-old Rashod Hill a shot at the job. Darrisaw in the first round is a more appealing option than either of those two. The 16th-ranked player on PFF’s Big Board broke out in 2020 to the tune of an elite 95.6 overall grade against a respectable slate of ACC edge rushers. He brings some legitimate power with him in that 6-foot-5, 314-pound frame.”

Pat Leonard of the New York Daily News: Caleb Farley, CB, Virginia Tech (note: Has Minnesota trading with Washington down to No. 19).

Tommy Garrett of Pro Football Network: Christian Darrisaw, OT, Virginia Tech. “A four-year starter, Darrisaw was one of the best linemen in the nation last season. He moves well when pulling and is a freight train downhill on run blocks. The Vikings rely on Dalvin Cook as their offense, and Darrisaw will plow the road for him for years to come.”

Andy Vasquez of NorthJersey.com: Christian Darrisaw, OT, Virginia Tech. “The offensive line has been an issue for the Vikings, who are still hoping to contend with Kirk Cousins at quarterback. Darrisaw is the right solution for the short- and long-haul.”

Brad Johannes of The Huddle Report: Alijah Vera-Tucker, OL, USC. “Moving on from Riley Reiff this offseason the Vikings have a hole at left tackle. While they could move last year’s second round pick Ezra Cleveland who filled in at guard last season. Not only does Alijah Vera-Tucker has the athletic profile for Gary Kubiak’s zone blocking scheme but he’s played both left guard and tackle which gives the Vikings some flexibility to put their best line combination out there.”

Scott Smith of The Action Network: Christian Darrisaw, OT, Virginia Tech. “The Vikings have needs in the trenches on both sides of the ball. Drafting Darrisaw would help both Dalvin Cook and system-based quarterback Kirk Cousins.”

Brett Esch of Full Press Coverage: Alijah Vera-Tucker, OL, USC. “After playing tackle this season for USC, Alijah Vera-Tucker will most likely make the move inside to guard at the next level. At 6-foot-4 and 315 pounds, he’s the textbook definition of a dominant physical force. Even better, he’ll fill a glaring hole that the Vikings are desperate to address: interior protection for quarterback Kirk Cousins.”

Stocks Positive for the Week After Third Day of Gains

Georgia Secretary of State Says Donald Trump ‘Knows in His Heart That He Lost’ : politics